Look what the Stork Brought

For the first time in my life I have had an electric bass made for me. It’s a neat feeling, almost like when someone writes a song for you (which I haven’t experienced, hint hint hint). This is the story about my friend at Fleet Guitars, Leslie McCurdy, and the beautiful fretless bass that he made for me.

I grew up playing Fenders and Fender clones. I own more than a few vintage Fender Precision and Jazz basses. My first bass was a 1969 Fender Precision, which I still play to this day. Actually, that’s the bass I’m holding on the home page of this website. I even have the leather strap that my dad bought for me when I was 13 years old. I remember the day he bought it for me. My dad took me to a guitar shop in Transfer, Pennsylvania, that was owned by a great guitarist named Max Schang, with whom I began playing with 8 years later.

“Dad, that strap is really expensive.”

“Son, when you buy a good strap, you’ll have it for the rest of your life.”

When I was 17 my parents bought me my first new bass. It was a Japanese made 1988 Fender Jazz Special fretless bass. Over the years I noticed that people seemed to like the way I played that bass. When I moved to NYC, I noticed that people here also seemed to like my fretless playing, though it’s not something I was really trying to push. For instance, one time I accidentally grabbed the wrong case on a way to a rehearsal, and that was it. They heard the bass and told me to bring it back.

That particular Japanese Fender was nice, but it really wasn’t a great bass. When you’re in NYC playing clubs where anyone may walk in, I thought that I should invest in a quality instrument. I knew that it was time to find a better fretless.

Not knowing much about boutique basses at the time, I went with what I knew and tried to find a vintage Fender, but the prices are crazy these days. Knowing that the key to a vintage sound lies in the volume and tone pots as well as the pickups, I decided to open up my amazing sounding 1969 Fender Jazz bass to check the serial numbers. As it turns out, the pots in that bass are from 1966. So, step one for me was finding a matching control plate with those exact pots. That’s where eBay came to the rescue.

It’s a long story and a bit off topic, but in a nutshell, I assembled a “vintage” Fender Jazz bass with the help of eBay, and it sounds and plays great. It sounds like an old Fender, which I thought was fine until I played a bass made by Leslie McCurdy of Fleet Guitars.

Leslie is a good friend of my man George Petit, who engineered my LaFaro record and the last two Tri-Fi records. He’s also a great guitarist, and I play in a few of his bands. George was one of those people who, after hearing me on fretless, requested that I stay on fretless. One day Leslie mentioned to George that he was going to start selling basses and George said “Hey, I know a bass player that you should meet!” That was it. I played a few of Leslie’s basses and immediately started talking about a personal, custom made fretless bass.

Leslie’s concept for his basses is based around one perfectly placed Gibson Thunderbird pickup. Having been a Fender man my whole life, I was totally unfamiliar (and unprepared) for the Gibson experience. I went over to Leslie’s house and played with his guitar collection, which is very impressive. He has a few different vintage Gibsons– a Thunderbird, EB0, as well as a few early ’60’s Fenders. Of course he also has a few of his own creations as well.

I really liked the Gibson sound. They’re big and round but have a tone that cuts through a band. I guess I’ve steered away from Gibsons because they have felt awkward to play for me. The Thunderbirds are headstock heavy and have an uncomfortable body shape and the EB0 feels like a toy. However, when I got past that, I really liked the sound. That’s where Leslie’s basses fill in the void by providing the best of both worlds.

Leslie is an unabashed Fender Precision fan. His first bass was a Precision, and his current lineup of bass creations are based off of the Fender “feel”. The string spacing on the bass he made for me is a Precision spacing. Picking up one of his basses felt comfortable to me, since I’m basically a Fender guy, but they all have that bite and sound of the old Gibsons which was a nice surprise.

That’s when I made the decision. I’ve been unhappy with Fenders when it comes to making my own music. Everybody seems to play a Fender or a Fender style copy. When I pick up my Fender Jazz fretless, it’s really hard not to draw a comparison to Jaco. Give me a Precision and I’ll dig into James Jamerson, Jerry Jermont, Chuck Rainey (a fellow Youngstown bassist by the way), etc… Yes, there are times when the gig calls for me to completely and unashamedly copy some or all of those players, and I LOVE doing that (especially Chuck and Jerry!), but when it comes time for me to make my own music and my own statement, I want to get as far away from that as possible. That’s why I was so excited to play Leslie’s basses.

I really liked the way Leslie’s basses sounded. They have everything that is important to a bassist. They have a great tone, plenty of punch, they cut through the band, and they sound like a bass– not some kind of fancy “ready to take a solo” thing. That said, they can also sing when you need them to. Oh, and since they’re hand made basses, they feel amazing. If you’re not happy with something, Leslie can make changes to suit your playing. I’ve finally found a bass with which I can cut the ties to my forefathers and create my own thing.

Leslie has been calling my bass the P-Bird, which he said means Phil’s Thunderbird, since it’s made for me and has the Thunderbird pickup.

He asked if I had any requests before he started. Well, the first thing I thought of was to get rid of the volume and tone knob and just wire the pickup directly to the jack! I always leave my knobs wide open anyway, so I thought it would sound better to get everything out of the signal chain. Well, long story short, it was too much signal for a bass preamp to handle. Rather than soldering in a resistor, we just went ahead and put a concentric volume/tone pot it. Other than that, I let him do his thing based on what he knew of my playing.

I had to decide whether I wanted a lined or unlined fretless. In the end I decided to just have him drop the lines in, even though I don’t look at my hands often. If I had it to do over, I’d probably go unlined just for the look of it.

The neck is made of solid Honduran mahogany with a two-way truss rod, 2 graphite rods, and an ebony fingerboard. He also laid a ebony veneer on the face of the headstock, which is a nice touch. 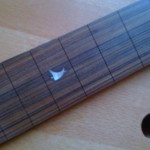 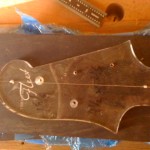 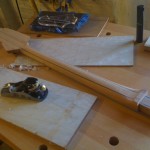 Leslie has two different body styles that he likes to make. I liked the one on the right. 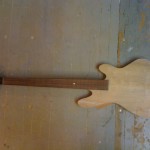 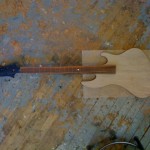 On the left, Leslie has drawn out the pattern for the top of the bass. The photo on the right is the body. The top is a 1/4″ thick piece of redwood, which he glues onto a thick piece of Mahogany. 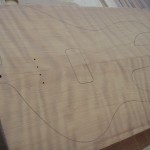 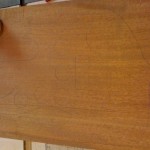 Another signature of Fleet Guitars is the chambered body. It makes the bass more resonant, gives it a better balance with the headstock, and makes the bass incredibly light!

On the left is Leslie’s template for the chambers, which he carved out of the body. The third photo is the finished rough body. 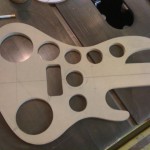 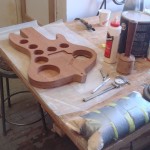 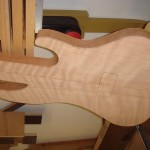 Finally, the body is finished and the neck is set. Then it was time to get serious about picking a color. I had the choice of going with a solid cover-all vintage style finish or a nitrocellulose see-through finish. I decided that the wood was much to beautiful to cover up completely, so I picked a red based nitro finish that thins out in the center to let the grain show through. 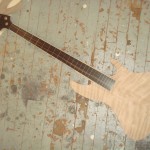 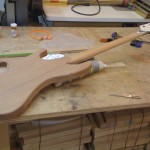 Pickguard or no Pickguard?

The top is so beautiful it was tough to decide whether or not to cover it up. Leslie showed me a few pickup guard style shape ideas, and we both agreed on the template you see on the left. From there I had to decide on a color. The gold was interesting, but in the end the black one won out. It has a tiny white binding that matches the tiny white binding on the neck nicely. 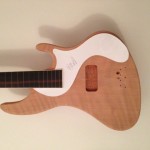 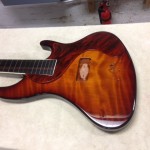 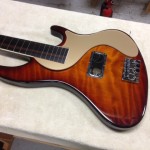 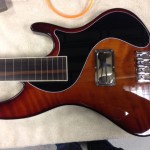 And here she is! As you can see, I started out with no knobs, which I thought was pretty sexy. 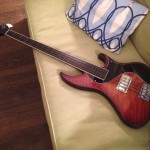 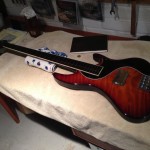 Left to right: A few of Leslie’s basses surrounding a mint 1962 Fender Precision that he was selling at the show. The 2nd photo is Leslie and me. Lastly, Leslie is playing another fretless bass that he made for himself. I really liked that bass as well!

Actually, I ended up liking every bass he’s made. If you look again at the first photo, check out the red bass 2nd from the left. It’s a fretted model with a slightly different pickup position from my fretless. I ended up buying that bass from him a month after the show. 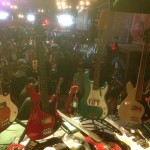 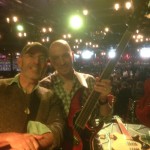 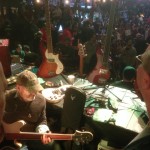 I’ve been taking my new Fleet Guitar signature P-Bird to every gig that I can and everyone loves it. Without saying a word about having a new bass, people come up to me and comment on the sound. It’s a hit!

Here are a few shots of me with George Petit’s band. 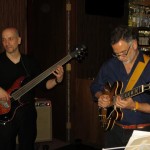 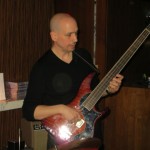 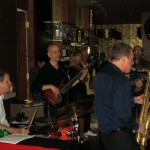 Now that I have a bass that speaks to me, I’ve been inspired to write my first all electric bass recording! Stay tuned for updates on that project.

If you’re interested in checking out Leslie’s basses, give him a call or drop him an email. The details are on his website: http://fleetguitars.com