Ground Hum Got You Down?

I love a good problem, especially when I’m actually able to figure it out AND it doesn’t involve my stereo. You can imagine my dismay when my stereo developed a loud ground hum after I had an electrician install two dedicated AC lines. 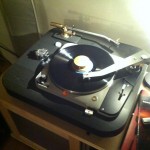 I was all excited to fire up the system that first night and listen to music that was un-muddied by all the noise running through the 60 year old circuit that I was using to power my fancy stereo. There are only two circuits for the 2nd floor of my house, which was built in 1942. In addition to lights, my stereo was also sharing the juice with a fan, TV, Tivo DVR, and a computer. All of these appliances introduce a little noise into the AC flow. You may not be able to notice it if you’re listing to music through a Bose Wave radio or similar entry level stereo, but you can definitely hear that gook in my fancy-schmancy system that I’ve put together over the last five years!

I’ve always felt that I am pretty decent at troubleshooting problems when they arise, but this problem had me on my toes. It can be tricky trying to troubleshoot something when you’ve just added a few new variables to the equation. In this case, I was having some work done to the house, so while I had an electrician on hand, I decided to talk him into running two new AC lines up to my stereo. Well, it took a little more than talk. I had to pay him, of course, but he gave me a great price since he was already around. He installed two 20amp circuit breakers and ran 12aug wire through the walls in the most direct way possible to my stereo. At the stereo end, I had him drop in two hospital grade outlets– a two outlet box on one line and a four outlet box on the other, side by side. After he finished the job and left, I plugged my power conditioner (which provides power to my preamp, DAC, Squeezebox Touch, turntable, and Oppo SACD/BlueRay player) into one line, and my power amp directly into the wall of the other new AC line. The thought there is, it’s best to have the sensitive electronics on one dedicated circuit, and the hungry power amp on it’s own separate circuit. As my tubes warmed up, I prepared a cool drink and cleaned some vinyl in preparation for the sonic bliss I was about to receive. As I flipped the mute switch to the  off position on the preamp, I was aurally assaulted with a very firm and not so pleasant hummmmmmmmmmmmmmmmmmmmmmmmmmmmmmmmmmmmmm D’oh! (the “D’oh!” was the sound that I made, along with a few other utterances that are unfit for publication).

That was not good. I plugged everything back into the old outlet, and of course everything was hum free. I plugged everything into just one of the new AC lines– hummmmmmm. Tried everything in the other– hummmmmmmm. Put a ground lift on the power amp just to see if that did anything– hummmmmmmm. What in the heck? Of course, my first thought was the electrician forgot to tighten something, so I immediately left him a message. He was able to come back in about a week. In the mean time, I did a little research and came up with a little advice about having a stereo plugged into two separate AC lines.

I love the internet. In the space of five minutes, I learned that the two new circuit breakers must be wired into the fuse box in-phase, which means that they need to either be across from each other, or have a space between them when you look at their position in the box. Mine were stacked one on top of the other, so they were out of phase. Still, when I wired everything into just one outlet, I still got the hum. So, while I was indeed going to have the electrician fix this and place them in-phase, this most likely wasn’t the source of the hum. I was still leaning towards the possibility that something was wired funny at the outlet end of things.

The reason for having two outlets wired in-phase is because all of the stereo components are connected to each other via interconnects (RCA wires for you non-audiophile people). If the preamp and power amp are plugged into separate AC lines, you are creating a bit of a loop by running the RCA lines between them. As I’ve said, I was confident that this wasn’t causing my particular problem, but it unlocked a clue for me later when the electrician came back and began to fiddle with things.

When he arrived, the first thing he did was move everything in-phase. Of course, my hum was still there. He then got rid of the hospital grade outlets and replaced them with standard heavy duty 20amp outlets. I requested the hospital grade outlet because I read an article in Stereophile that they gripped the prongs of power cables better. My electrician told me that they also had something called an “isolated ground”, whatever that means. Since the word “ground” was involved, we both assumed that swapping them out would fix the problem. Hummmmmmmmmmmmmmmmm…….nope.

So, we were both stumped. I remembered the bit about having wires between components causing issues, so I decided to start disconnecting wires. First thing off was the wires to both of the tonearms of my turntable. Then the phono preamp for my mono arm. Then the cables running to the DAC, the the HDMI cable to my Oppo SACD/BlueRay…….. all of a sudden the hum was gone! HDMI in– hum back. HDMI out– hum gone. HDMI in– hum back. HDMI out– hum gone. It felt good to do that a few times. Cable out, cable in, drums stop, bass solo begin (oops, wrong story). So, here’s what was going on with that dang hum.

I had the TV running into the old circuit, and the HDMI cable was stringing from my stereo’s SACD/BlueRay player to the TV creating the ground loop. The electrician and I ran back down to the basement to check the phase of that old circuit, but it was indeed in-phase with the two new lines. The electrician checked the strength of the ground on that circuit and we found what was potentially causing our problem. The ground was really weak. That line is really old, and it does’t have the third green ground wire running through it like newer lines. It’s supposed to get a ground current through the metal sheath, but like I said, it’s an old line. So, at that point I let the electrician go since there was nothing more he could do. I knew what my only chance was to fix this. 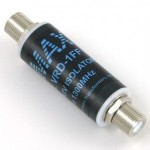 As a last ditch effort, I remembered another possible source of ground interference– the coaxial cable TV line! Years ago I bought a little ground isolated filter made by Jensen that you’re supposed to drop into the coaxial line before it hits your TV. There are many brands, but I seem to remember this one being the best for some reason, and I just happened to have it sitting in my desk. I popped that into the coaxial path at a junction point and the hum completely disappeared for good!

If you keep your stereo completely independent from your TV or home theater, then you probably won’t ever have this problem. However, it’s getting harder to keep stereos separated from your TV/home theater unless, of course, you have the budget to have two great systems. Before I remembered that I had the Jensen lying around, I thought I’d just unplug the HDMI cable when I wanted to listen to music. Then I remembered, um, what about when I wanted to watch a DVD or BlueRay. I have a great Cannonball Adderley DVD that I was not about to give up! And what about my Joni Mitchell’s Shadows and Light DVD!? Well, I’m glad that I remembered the coaxial ground isolated trick!

Now that everything is hum free, you should hear what a difference having a dedicated AC line makes for your stereo. Happy listening!