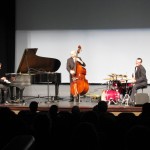 Really, it’s been T-E-N years already? It’s hard to believe that my co-op lead trio of friends has been playing, touring, and recording for ten years. Some of you may know about Tri-Fi already, but let me give a quick little backstory for the people that do not.

Once upon a time in the land of New York City, there was a bass player named Phil Palombi. One day, Phil met a drummer named Keith Hall at a jam session. They were very happy to play together and were often called upon to team up in a rhythm section. Years later, Phil met a brilliant young pianist named Matthew Fries. The chemistry was there from the beginning. 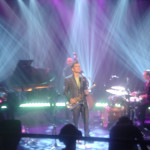 Unbeknownst to Phil, Matthew and Keith were already very good friends who were at the time backing a vocalist named Curtis Stigers. When the bass chair opened up in Curtis’ band, both Keith and Matthew (without talking about it) independently recommended the young Phil Palombi for the gig. Their journey as a trio was underway! Performing over 100 gigs a year backing Curtis really brought them together as a trio, so much so that they decided it was high time to record their own music under their own name. Yep, you guessed it- Tri-Fi was born!

Ten years later, we are just about finished with our FIFTH recording as a trio. We’re not as young as we were ten years ago, but we’re playing better than ever. It’s been amazing to hear how our writing and playing has changed over the years.

I’ve spent quite a bit of time listening and analyzing Scott LaFaro’s playing with the Bill Evans trio. What I’ve learned from this is that without Bill and Paul Motion, Scott would have had a harder time achieving his vision of bass playing. So much of that trio was designed around Scott’s strengths and vision. Bill and Paul’s support gave Scott the freedom to push the boundaries of bass playing. After ten years, I feel like Keith and Matthew have become my Paul and Bill. I can play other gigs with other people and sound decent, but I always feel like I play my best with Tri-Fi.

So, why am I telling you all of this? Well, with the last two Tri-Fi CDs we turned to a crowd sourcing website called Kickstarter.com to help us fund the project in advance. We’re looking to repeat our past success with the Kickstarter drives once again with our ten year anniversary CD!

On Friday we launched a campaign over on the amazing Kickstarter Crowd-funding website to raise the funds we need to get this CD launched in early 2014. We’re not asking for donations. Basically we’re trying to collect enough pre-sales to get this CD in the hands of people who want to hear it! Folks who support us through Kickstarter will have a copy in time for Christmas (at least a month earlier than anybody else…). 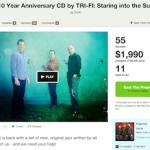 Our goal is $6,500 and we only have 11 days left to raise the money as of Thanksgiving Day!

We’ve got some music “in the can” as they say – recorded in May of this year. We feel it’s some of our strongest writing and playing as a trio yet. We really want to release the album ourselves as we’ve done in the past, and we need to raise a bit of money to finish the project. Doing a recording right takes money, so we’ve got some bills to pay…

Please pop over and check out our Kickstarter page and watch the video. The goofy video is worth the trip alone. You can also check out what we’re offering to help us raise the money.